Showing posts from August, 2010
Show all

DTrace to the rescue!

We recently migrated data to some older servers and ran into a performance problem during peakhours.

On our busiest days, we've seen the load go up to over 300. Luckily this is a SPARC system, and it was still somewhat responsive. Not bad for an old 2 Socket system...

Looking at the CPU utilization using vmstat, showed a high percentage of time spent in SYS.


You can see this in the two performance graphs (the graphs were made on a Sunday, with a lower load).


After looking at the processes with prstat -Lm (microstate accounting) and seeing the high SYS-percentage, we decided to look at what the kernel is doing.

Solaris has a nifty tool called lockstat. This is what it revealed: 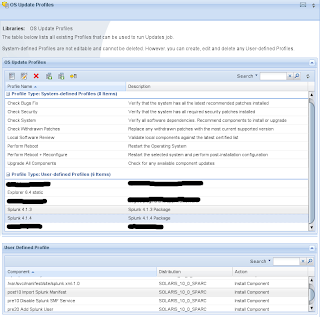 There has been some discussion on Constantins blog about working around IPS' scripting limitations.

I don't want to talk about the reasons, why IPS does not have classical pre/postinstall-scripts, but I want to demonstrate how this functionality could be achieved with Oracle's Enterprise Manager OpsCenter.

If you don't know OpsCenter, it's _the_ management tool from Oracle for Solaris, Unbreakable Linux and OracleVM.

In OpsCenter terminology Package deployments are called "OS Updates". OS Updates consist of Update Components (Packages, Patches and Configurations), Update Policies and Update Profiles. If an OS is to be updated, so called "Update Profile"-jobs will be sent to hosts run.

There are two types of Update Profiles, System-defined and User-defined. What we're looking for are user defined profiles. A user-defined profile contains components. These components can be Packages, Pre/Postinstall-Scripts and Config…
2 comments
Read more
More posts